Wharfedale and a team of esteemed specialists have created a range of ‘budget’ speakers that punch far above their weight, elevating expectations of what can be achieved at such lowly price points. And, despite the speakers’ compact size, the soundstage they produce is substantial and engaging, their expressive midrange definition transitioning seamlessly with fluid high-frequency detail. The bass reaches surprising depths yet remains lucid, accurate and controlled, thanks to the speakers’ advanced bass drivers and P-EQ bass reflex port. Whether the music is driving and energetic or soft and subtle, from rock and electronica to classical and jazz, the D300 Series speakers deliver captivating sound.

The D300 Series incorporates the most advanced drive unit systems ever seen in such an affordable loudspeaker range. For the bass/mid drivers, the latest generation of Wharfedale’s long-established woven Kevlar cones are bonded to a super-lightweight rubber surround, delivering remarkable clarity, texture and musical expression.

These cones are driven by a super-long-throw voice coil motor system, enabling low-frequency linearity and accuracy that is exceptional for such low-cost loudspeakers. The use of a specially shaped one-piece pole plate fitted with a copper cap reduces inductance and controls the magnetic flux, ensuring low distortion through the critical midrange area. Oversized ceramic magnets – a technology pioneered by Wharfedale in the 1960s – ensure high sensitivity, smooth response and absolute control of cone movement over lower bass frequencies.

The driver assembly is mounted in a specially designed basket with a network of ribs to increase rigidity, thus improving transient impact. A large open area behind the cone reduces early reflections and allows the internal cabinet absorbent to do its work.

Developed for the Diamond 11 Series and fine-tuned for the D300 range.

A Large magnet, selected to give a smoother transition from midrange to high frequencies, is attached to a pole piece with copper cap for flux control. The pole piece is vented through to the rear chamber to achieve a low resonant frequency, ensuring excellent linearity and allowing the textile dome, sited within a dished waveguide, to contribute to a wonderfully lucid midrange as well as smooth, pure and richly defined high-frequency detail.

The output of the drive units is carefully combined by a thoroughly researched crossover developed using Wharfedale’s Advanced Software and Listening Iteration system. Each crossover is carefully evaluated using a wide range of music, with the emphasis being on the lifelike reproduction of voices and instruments in addition to the dynamics of the musical performance. Crossover components feature low-loss polypropylene capacitors and laminated core inductors for optimum transfer of the music signal.

The acoustically profiled cabinets feature 28mm-thick front baffles – a luxury, engineering touch to such low-cost speakers – profiled at the edges to reduce diffraction edge reflections at mid to high frequencies. Critical bracing of the cabinet panels contributes to the eradication of audible resonance and, combined with the rounded cabinet edges, yields a rigid base on which to mount the drive units. In addition, the cabinet walls are lined with a specially developed internal fibre, chosen for its outstanding absorbent qualities across a wide bandwidth.

The result is that the listener hears the drive unit output unsullied by unwanted colourations caused by panel vibration or internal resonances, revealing more of the detail of the musical performance.

Developed from the Slot-Loaded Distributed Port found in the Diamond 11 Series, the D300 Series’ P-EQ (Pressure Equalisation) port system is critical to the speakers’ deep and controlled bass performance.

Low bass frequencies emitted from the rear surface of the bass driver travel through a downward-firing port in the base of the speaker, with precisely curved openings to smooth airflow. These frequencies exit into the room omnidirectionally through a gap between the cabinet and the surface on which it rests (or, in the case of the D330, between cabinet and plinth), formed by four ‘feet’ attached to the speaker’s base. This reduces the pressure differential between the high pressure in the port and the low pressure in the room, thus eradicating the turbulence and audible ‘chuffing’ suffered by conventional ported systems whilst aiding bass reflex efficiency.

The result is a natural recreation of the fundamental notes of bass instruments, matching the realistic sound of the midrange and treble characteristics. It also allows the listener to position D300 Series speakers closer to a rear wall than would be possible with conventional rear-ported speakers, helping to make them less obtrusive in a room setting.

Wharfedale called upon the talents of well-known specialists to develop the D300 Series. These specialists produced many of the award-winning designs for Wharfedale’s sister-companies Mission and Quad. Acoustic performance was managed by Peter Comeau, Wharfedale’s Director of Acoustic Design and one of Britain’s foremost loudspeaker designers.

Together, the talented teams led by these esteemed specialists have created a range of ‘budget’ speakers that punch far above their weight, elevating expectations of what can be achieved at such lowly price points. Despite the speakers’ compact size, the soundstage they

produce is substantial and engaging, their expressive midrange definition transitioning seamlessly with fluid high-frequency detail. Bass, meanwhile, reaches surprising depths yet remains lucid, accurate and controlled, thanks to the speakers’ advanced bass drivers and P-EQ bass reflex port. Whether the music is driving and energetic or soft and subtle, from rock and electronica to classical and jazz, the D300 Series speakers deliver captivating sound. 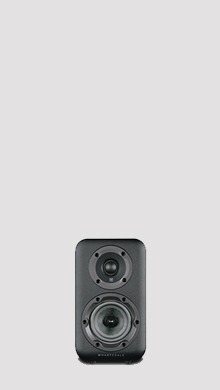 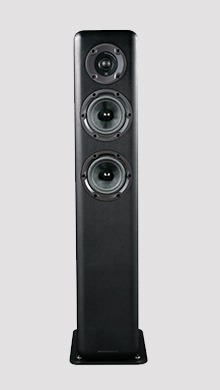 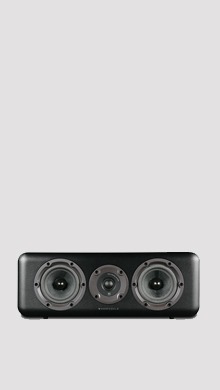 Send us an email and we'll get back to you, as soon as possible.